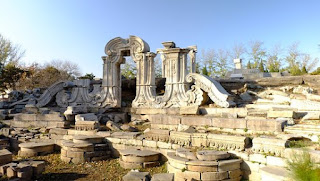 Yuan Ming Yuan, translated, "Garden of Gardens," is located in Dunhuang, China.  It was built in 1707 by the Kangxi emperor, and at one time was considered China's largest and most luxurious imperial garden.

Today most of it lies in ruins.  Much of it was destroyed by French and British troops in the Second Opium War of 1860.  Still, it's an interesting place to visit.  On its 865 acres, visitors will see ruins of ancient imperial buildings, along with hills, lakes, ponds, woods, and flowers.
Some restorations have begun on the garden.  Wanhua (10,000 Flower Maze), a maze of winding paths between low walls, was recently reconstructed in the Changchun Yuan (Garden of Eternal Spring) section.
The garden is open daily from 7:00 AM to 7:00 PM.  Admission is 10 yuan.