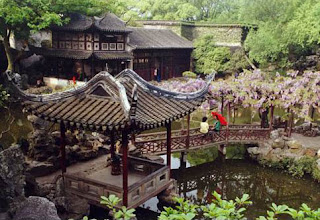 Liu Yuan Garden, located in Suzhou, China, has been listed as a 4-AAAA national tourist attraction and a World Cultural Heritage site.

The name, Liu Yuan, means "lingering in the world."  It certainly is a place you'd want to linger in!  The garden was constructed in the Jiajing period of the Ming Dynasty in the mid 1500s.  It  covers about 6 acres.  There are basically four parts to the garden:  A picturesque central part, known for its streams and rockeries, an eastern part known for its courtyards and buildings, a northern pastoral section, and a western part that features woods and large trees.