Palais Het Loo is a Dutch baroque garden in the Netherlands which was made in 1684 by William and Mary, the same people who later became king and queen of England. 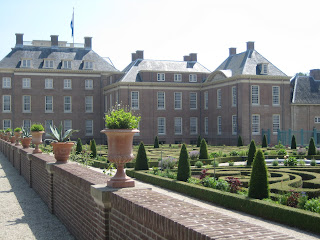 Palais Het Loo has been called the "Versaille of Holland" because of the layout, fountains, and statues.  As is typical of Baroque gardens, they follow perfect symmetry.  Within the gardens are four individual gardens:  a King's garden which has a bowling green, a Lower garden with beautiful statues, a Queen's garden, which was the private garden of Queen Mary, and an Upper garden.

If you visit the gardens in warmer months, you'll see orange trees planted in square white tubs.  These are placed in the garden as an emblem of the Prince of Orange.  They are returned to the orangery in the colder months.

The garden is open year round Tuesday through Sunday from 10 -5.  Admission is 12.50 euros for adults and 4.00 euros for children.