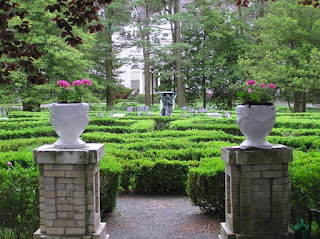 Sister Mary Grace Burns Arboretum is on the campus of Georgian Court University in Lakewood Township, New Jersey. Originally, it was the landscaped park for the winter home of George Jay Gould, son of railroad tycoon, Jay Gould.

In 1896 architect, Bruce Price, was hired to create a replica of an English estate from the Georgian period. Since the New Jersey soil isn't great for planting native English plants, 5,000 cartloads of soil were brought in. Four major gardens were created:  the Italian Garden, Sunken Garden, Formal Garden, and Japanese Garden.

In 1924, the Sisters of Mercy of New Jersey bought the estate and it became the campus of what is currently Georgian Court University.  An additional Wellness Garden was added by students in 2008. The place is a National Historic Landmark.

The garden is open daily from dawn to dusk. Admission is free.
Posted by Sherry Ellis at 8:16 AM