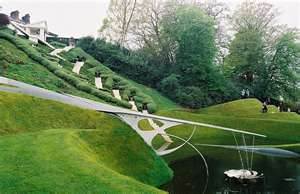 Don't you just love the name of this garden?  This is definitely a one-of-a-kind garden.  I've never seen anything else like it in all of my travels.  The Garden of Cosmic Speculation is located in Dumfries, Scotland.  It covers thirty acres and was built in 1989 by Charles Jencks, an internationally acclaimed architectural critic and designer.  The garden is actually his own private garden.  It is open to the public only once a year (usually in May).  If you want to see this place, you'll have to do a little planning (and get there really early when it does open, because the traffic jams are ridiculous).

The garden was designed to provide thought (speculation) about the nature of things.  It was inspired by science and mathematics, with themes like Black Holes, Fractals, and DNA helixes. 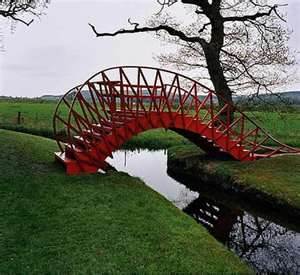 Plants are not the big feature here.  There are a couple of man made dragon lakes. Mostly what you'll see are a lot of steel structures and symmetry.  The garden begins at the base of steps leading down from the original eighteenth century manor house.  You'll see a Sense of Touch garden, where a metal hand waves back and forth, beckoning visitors to come check it out.  You'll see a steel DNA helix and a Heaven-Hell primeval wilderness garden with a beautiful red arched bridge 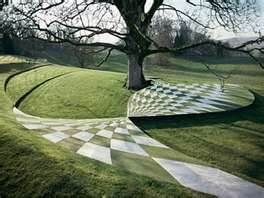 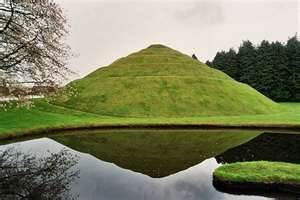 The snail mound allows you to explore the Fibonacci Sequence of numbers that make up the shell. 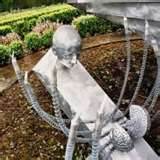 It would be nice if this place was opened to the public year-round.  The only reason we get to see it, is because it serves as a fundraiser for the cancer charity, Maggie's Centers, named after Mister Jenck's late wife.  If you ever get the opportunity, be sure to visit.  It's really a neat place!﻿
﻿ 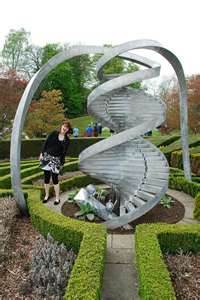